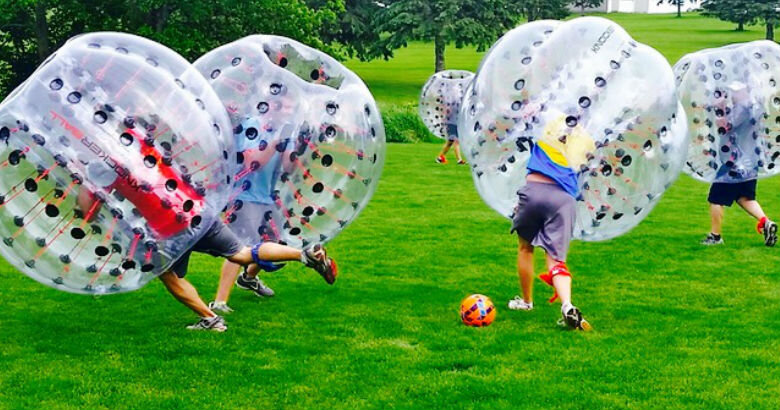 You probably know about Bubble Soccer, which is a brand-new and exciting sport. This game is one of the best, coolest, and most fun games to hit the market in a very long time. This modified version of soccer adds social interaction, exercise, and even some friendly competition. Other games that can sometimes be played with “inflatable bubble suits” include Capture the Flag, Prison Break, King of the Circle, Sharks and Minnows, and Bubble Soccer.

WHAT IS BUBBLE SOCCER?

Multiple players, like a football team, participate in a physically demanding game of “bubble ball football” while having their own personal plastic bubble ball. Imagine a combination of human bumper cars, sumo wrestling, and football and soccer rules. Sounds like a good time, no? We are addicted to this bubble sport, we know it!

WHERE DID BUBBLE SOCCER COME FROM?

The Zorb Ball, which is similar to the human hamster ball and was the inspiration for the invention of bubble soccer, is a unique sport. The concept behind zorbing is that a person, or perhaps more than one person, can climb into a giant inflatable “zorb” and roll down hills or flat surfaces while competing and having fun. People use common water sources including lakes, streams, and even the ocean.

The plastic bumper bubble ball used manufactured from TPU or PVC and opens at the top and bottom to allow you to breathe and move around freely. It includes internal grips and movable shoulder straps for users to master rolls, flips, and wheelies. Similar to a large donut or pool float, but made of a much harder material.

How Do You Play Bubble ball?

What are the bubble ball rules and how exactly do you play now that you know what it is? Depending on the occasion or the environment, the rules of bubble ball. may change. The rules for tournament and league play are much stricter than for a private event.

HOW DO YOU WIN AT BUBBLEBALL?

The ultimate objective of bubble ball is to score the most goals, just like soccer and most other sports. This is accomplished by kicking the ball into the opposing team’s net.

HOW MANY PLAYERS ARE IN BUBBLE ball?

Each team usually consists of 5 field players, no goalkeeper, and 2 or 3 substitutes. As long as an equal number of players remain on the pitch, substitutions may be made freely (on the spot).

During a bubble ball game, there is often one official, accompanied by one or two sideline officials. This is done to ensure that the game is safe and fair.

LENGTH OF A BUBBLE BALL GAME

In terms of length, Bubble ball can be played in a few different ways.

Other games are played in four quarters, each lasting 10 minutes.

or 2 halves, each lasting 15 minutes

Every team is granted three 2-minute timeouts. Only injuries and timeouts can halt play during a game. When the ball leaves the field, the play doesn’t stop.

WHAT ARE BUBBLE SOCCER RULES?

The ball is positioned in the centerfield like in soccer. Players should stay at least 10 feet away from the ball and no closer than 20 feet when playing Bubble ball.

The ball cannot be held by Bubble Ball players.

If they do, they may be given a penalty that requires them to leave the game for up to two minutes (like in hockey). Until their penalty is over, their side will be without one player.

The referee will throw the ball back into play if it crosses the line of play.

Offside regulations are not present in Bubble ball.

Players cannot hold the ball, as was previously established. Players are not permitted to score using their hands. They have to put the bubble ball in the goal.

Without the ball, no player may “bubble bump” or “bubble hit” another. Additionally, they are not permitted to stop a fallen Bubble Ball player from getting back up.

It’s against the law to kick, grab, or trip another Bubble Ball player.

WHO CAN PLAY BUBBLE SOCCER GAMES?

We have played Bubble Ball games with people of various ages, from 5-year-old kids to adults in their 70s. It is entertaining and safe for players of most ages because the regulations and best practices are followed!